Eric Hall has been named the new Boys Lacrosse coach at James River High School. Hall succeeds Rob Helsley, who stepped down earlier this month. Helsley led the Rapids to a highly successful period during the last few years; highlighted by a trip to the 2016 6A VHSL state finals.

Eric Hall is formerly the head coach for the Melbourne Central Catholic Hustlers in Melbourne, FL where he has led the Hustlers to 2015, 2016, & 2017 District Championships and consecutive appearances in the Round of 16 of the FHSAA state playoffs in 2015 and ’16.

Eric was formerly coach the of the Atlee Raider’s Varsity Boys Lacrosse Team, the winner of the 2012 VA Club Lacrosse Championship.  He led the Raiders as they transitioned from a club team to a Varsity VHSL team making it to the state quarterfinals in their first VHSL season.  In three years, Hall led the Raiders to a 38-11 record that included a State Club Championship and second place finish.  Teams averaged 5.4 goals against the Raiders in the 3 seasons under Hall capped off by a 4.6 goals against average in 2014, good for best in the state of VA.

An upstate New York native, Eric has been involved with organized lacrosse for over twenty years as a player and now a coach. Eric was a three year varsity starter as a defenseman for the General Brown Lions, was a captain, and was selected to the all-league team his senior season. Eric went on to play at SUNY Cortland and was a defensemen on the Red Dragon 2006 national championship team.  Eric graduated from Cortland in 2009 with a Bachelor’s Degree in Bio-Medical Sciences.  He went on to earn his Master’s Degree in Biology from Virginia Commonwealth University in 2011.

Eric co-owns North Meets South Lacrosse and is an active coach and program director in the diverse array of lacrosse programming  that NMS lax has to offer in Richmond and Jacksonville including elite and academy level travel teams, box lacrosse, camps, clinics, rec leagues and other instructional training. 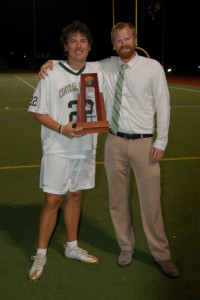