Bobby Henderson has been named the 5th Head Football Coach in the history of James River High School. He succeeds Greg Defrancesco; who retired from coaching in December. Henderson has been the Assistant Head Coach and Defensive Coordinator at Monacan High School since 2014. Monacan was 29-8 during his three years including a run to the State Semi-Finals in 2014. Henderson’s defense scored 14 touchdowns and held opponents to 12 points per game during that historic year. Overall, his unit’s have forced an average of 33 turnovers per year. Prior to his arrival at Monacan, Henderson served as Defensive Coordinator at Hopewell High School for two years. He is a Social Studies teacher and will be a teacher in the building.

Henderson comes from a football coaching family. His father was a longtime assistant coach at Hopewell High School. One brother, Jim, is the head football coach at Monacan, while another, Trey, is the recruiting coordinator at William and Mary. 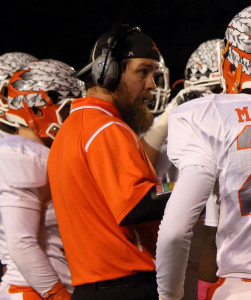